Meeting people and building friendships in real life can at times be nerve-wracking and intimidating because of its unpredictable nature. One cannot guarantee that the person they are meeting will be someone they can effortlessly connect and vibe with. Karma the Game of Destiny aims to change this experience by providing adults a fun way to meet and socialize in both the digital and real world.

This revolutionary platform is the first of its kind in the world and is an immersive digital magazine that brings AR and VR together. It does not have any membership or subscription fees, although it has a unique monetization model. It has game diversions and a social living periodical that shows listings of venues and events. Profiles can be terminated by the player or other players in its classified advertising section, effectively promoting a community built on mutual respect. In a nutshell, the platform is a gateway where individuals play to meet people, go on adventures, forge great friendships, and find business opportunities or relationships.

Designed to create a new level of communication in the inter-reality space, the magazine has expertly blurred the lines between the digital and physical realms. It contains multiple features that complement the overall experience, such as Social Communications, Meetup Game Show, and Circus of the Interreality Space. Suitable for adults of all generations and tech-savvy individuals that thrive off of social living adventures and entertainment, Karma the Game of Destiny has something to offer for everyone: classified listings, diversion games, animated fictions, sitcoms, and dramas played out by pseudo AI characters within the digital spaces, and many others. It is a true reflection of the rise of internet culture.

When chairman and co-founder René Reyes was asked to describe it, this is what he said: “The first inter-reality play app and game ever. The world will never be the same again. With Karma the Game, the whole world is our stage. Every venue and event is our domain and the inter-reality space is our special sauce. Karma the Game of Destiny will absolutely surprise you as you surrender to its simple complexity.”

The impressive venture has managed to innovate further and elevate into a more comprehensive platform. Its most notable element is perhaps the Ambassador App, which is designed to give users money from referrals and getting other people to play the game as well as build a wider audience. It even has its version of a magazine crossword that uses a 3D/VR platform called Karma the Game – Space Run; it is a running game where users collect Zodiac Coins or jump through numerous 3D portals to other worlds.

Karma the Game of Destiny was co-founded by two outstanding personalities: René Reyes and Robert Porter. Being enthusiasts of entertainment, science fiction, and comic book culture, the two of them decided to merge these forms of media and bring them to life in the real world.

Robert Porter expressed, “We are building a world that overlays this world and mixes with the digital world in the form of an immersive inter reality play magazine. Gamified classified advertising is the bread and butter as well as listings of venues and events are posted by ambassadors that make money and level up to make more and more as independent co-hosts and ad sales influencers. The game has hundreds of portals to others worlds both ‘in the real’ and ‘into the digital.’”

Co-founder Robert Porter and his great team of experts share their commitment to continue creating projects that add value to life and bring humanity closer. As senior VP, Andy Khan had profoundly put it this way: “I am excited about entering into a new realm of possibilities and adventure. This is what Karma the Game of Destiny means to me, an endless universe layered on top of the real world with augmented and virtual reality capabilities allowing players to traverse seamlessly from one world to the next.”

Read more in the article “Karma the Game of Destiny: A Revolutionary Platform for Making Social Connections"

Karma the Game of Destiny: Immersive Experience Changing the World of Gaming and Dating 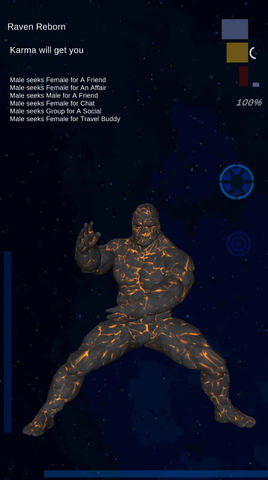 Get the Memo - Issue 7 by Spencer Tyson